The School of Death 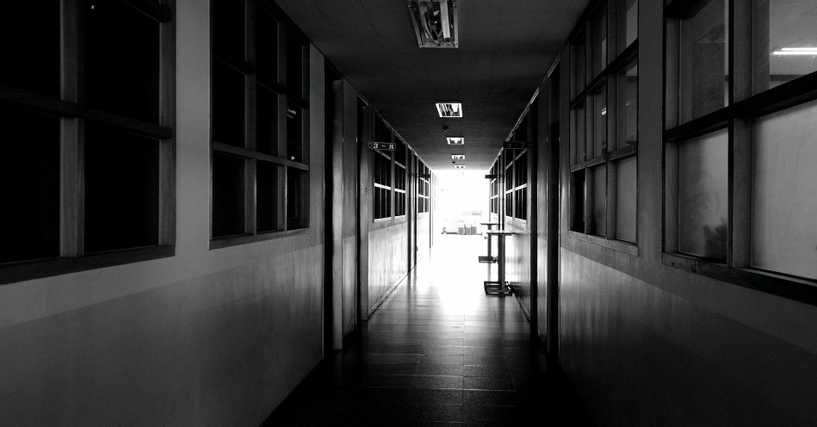 Chris was daydreaming. He always did that everywhere. He liked to escape reality and create his own worlds. He would be happy and safe there. He could marry the girl of his dreams, make as many friends as he wanted, and pretend his parents were proud of him. And now he dreamed of having his arms around his crush, he was about to kiss her. ‘Chris…Christopher!’ Chris sighed as he was drawn back into reality. ‘Yes sir?’ He answered his English teacher. ‘Seriously Christopher, stop that and pay attention the lecture.’ The teacher scolded him. Chris stared at him, then said softly, ‘Yes, sir.’ His teacher was about to say something again, but then the bell rang.

All the students hurriedly left the classroom. On the other hand Chris and quietly packed his things and got up to walk slowly to the cafeteria. Halfway through, he changed his mind and looked for an empty hallway instead. He sat down on the floor and took his food from the bag he had set on the floor next to him. It was just bread with butter. His mother never made anything else for him. He couldn’t make anything for himself either because he wasn’t allowed in the kitchen, according to his mother he would burn it down.

Then Chris shot his head up when he heard footsteps coming toward him. He saw a girl, or to be more precise, his crush Anna. He looked up at her and she looked at him. She seemed curious and somewhat concerned. ‘Are you ok?’ She asked him, Chris nodded his head, he had lost the ability to talk. She smiled and sat down next to him. ‘Why are you eating lunch here,’ she looked around the empty hallway, ‘alone?’ He shrugged and said, ‘I…I like being alone, I guess.’ She smiled at him again. ‘Should I go then?’ she joked. He quickly shook his head. ‘Um… what I mean is it’s fine. I don’t mind…uhm…some company from time to time.’ He attempted to smile, but he believed it looked more like an awkward grin.

Chris opened his mouth to ask her something: ‘Uhm Anna, can I ask you a question?’ She gave him all her attention and signaled Chris to continue. But then the bell rang. ‘Ask me after class, okay?’ She stood up and winked at him, ‘Don’t forget.’

Chris walked to his classroom, the science lab. His mind wandered back to that moment. She had winked at him, Anna had winked at him. He felt his face heat up. He looked down at the ground, smiling to himself. Chris had arrived at the science lab, he then saw Anna sitting at the table. Chris mentally slapped himself. He had completely forgotten they shared chemistry class.

‘Christopher, I would like you to pair up with Anna today. We’re doing an experiment in pairs and you two were the last to join the class.’ The teacher told him pointing at Anna’s table. Chris nodded as he made his way towards Anna. ‘Hi…uhm…’
She giggled: ‘You forgot we had class together, didn’t you?’
He nodded. She smiled at him before turning her attention toward the teacher.

‘Everyone pay attention. The instructions I will give you are very important. If you do even one thing wrong, bad things can happen. So you’ve been warned. Now first…’ He had already lost his focus and disappeared back into his own world. Anna pulled on his arm and brought him back to reality. ‘Let’s go. We have to start.” She led him to the closet of all kinds of fabrics. ‘What do we need?’ He asked her. She pointed out some supplies they needed for the experiment. He picked them all up to carry them to their table later, but then she hesitated. ‘Hmm… the last thing the teacher said we needed was this,’ she picked up a glass with an odd-looking content, ‘I think.’ He looked at her, his expression a little concerned. She turned to ask the teacher, but she was nowhere to be seen. ‘She went to the bathroom.’ One of their classmates answered their unspoken question.

Anna looked up at Chris, then made the decision to take the substance she had picked up. ‘Uhm…Anna…are you sure this is a good idea?’ He was worried. The teacher clearly said that if they did something wrong, a lot of bad things could happen. ‘It’s fine,’ she shrugged, ‘what’s the worst that could happen?’

A few minutes later, everyone was seated at their tables and the experiment began. The teacher had already returned and she walked past the pairs checking if everything was going alright. Chris and Anna concentrated on their own work. They did everything according to her memory, hoping that it would work. He was scared for his life, or rather his grades, but she didn’t seem to care. It was obvious she was having fun.

The two snapped their heads towards what appears to be an explosion and what they saw shocked them to the core. To their left, where the explosion happened, was their classmate. His face was still obscured by the smoke, once it cleared the sight was terrible. What their classmate was now looked like a monster, maybe it was a zombie. His features were gray and dead. The eyes seemed to pop out of his skull at any moment. And Chris noticed that one of his hands had been replaced by… a large splinter? It can certainly penetrate and kill. The whole class was too shocked or too scared to move. Then all of a sudden it was chaos. Several explosions had gone off and some of their classmates were no longer human. People screamed and the things attacked.

Throats were cut, heads were cut off and limbs were torn apart. The hitherto frozen Chris finally came to his senses, took Anna’s hand and dragged her out of the classroom. The monsters followed them. They could now spread through the school and leave behing a trail of death. But he didn’t dare look back. He just ran, still dragging her.

They were everywhere now. And somehow there were more. How could they spread so quickly? Do they bite people? Chris and Anna slowed down to catch their breath. Still holding hands, they quietly walked through the school, dodging the monsters and trying to find a way out. Those things were everywhere so it was hard. ‘Hey Chris, I was wondering. Why didn’t our experiment explode? Is it because we might have used the wrong ingredient?’ Anna looked at him. Chris shrugged, ‘Probably, but we don’t have time for that now. We have to find a way out without…’

He suddenly stopped causing Anna to bump into him. ‘What happened? Why did you stop?’ She peaked from behind him and her eyes opened wide. One of them was standing in front of them. Eating a girl’s guts, and the girl was still alive! Anna saw her face tremble in pain. Anna wanted to scream for help, she wanted to cry, but she didn’t, she knew it would be a big mistake. She turned to Chris who, like her, was horrified by the scene going on in front of them. She could feel him shaking. She squeezed his hand slowly pulling him the other way.

Chris felt her hand squeeze his and gently pull him away from the stage. He turned and saw it, it was behind her. But she didn’t notice because she was facing him. Then the clock seemed to tick more slowly. As if time wanted to save her. He watched the thing raise its arm, ready to stab her. Chris quickly grabbed her shoulders and turned them both around. She had a shocked expression on her face, he was just smiling. A sudden pain shot through him. He looked down and saw the monster’s weapon pierce him. He looked at her, hands still on her shoulders. Her eyes were large and tears were streaming down her face. ‘No…Chris…’ she wailed. He smiled at her again. ‘So that’s what dying feels like?’ And he felt himself lose consciousness. Drifting into the darkness.

‘Chris…Chris…Christopher!’ He was roughly brought back to reality. ‘Please pay attention to the lecture, Christopher. How many times do I have to ask you?’ His English teacher sighed. Chris hung his head and said softly, ‘Sorry, sir. I was daydreaming.’ As the teacher turned, Chris suddenly felt a hand on his shoulder. He looked to the side and there was his seat mate and crush, Anna. She looked at him with a relieved expression and tears rolled down her cheeks.

4 thoughts on “The School of Death”