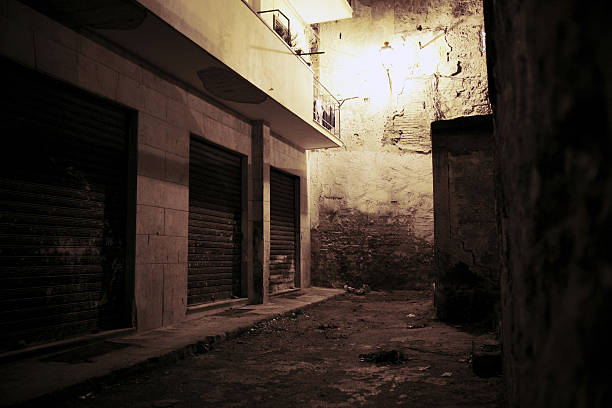 Loud splashing sound of footsteps running through puddles made by the rain. It had stopped pouring a while ago but the owner of the footsteps was soaking wet. She had been running through the streets for quite some time, going as fast as she could trying to catch someone. The person who had been her target for years, who she was trained to kill.

She could feel the distance between them becoming smaller, she was catching up to him.  In the distance she could faintly make out his silhouette going around a corner. She sped up and followed him. And there he stood, facing her, she could only see his eyes glowing red in the dark alley. Behind him a dead end, being the reason that he stopped running, he had no choice but to fight her. The 22 year old woman smirked. ‘Give up, vampire. You’re going to die.’ There was no answer from his side. She sighed, took out the knife hanging by her side and dashed forward to attack. Putting her knife forward, ready to slit his throat. As the meters turned into centimeters, they made eye contact. And in that slip second of looking into those freaky yet beautiful blood-red eyes she realized she had failed, again. Because right when the blade was about to fulfill it’s purpose, the vampire disappeared. She was left in the alley, the knife in her hand reflecting the light of the moon. ‘NO!’ Angrily she threw it on the ground, grabbing her hair she screamed out every bad word you could thing of. After a minute or two, she had finally calmed down.

‘Dali?’ Her friend called out to her, he came running around the corner and saw her sitting on the ground. ‘Are you ok!?’ He immediately ran to her with worry. ‘Yeah yeah I’m fine…’ Dali looked into the boys eyes. He was sweating, as he had been trying to catch up to her. ‘Let’s go home, Luca.’ He nodded and helped her up. He attempted to swing her arm around his shoulder to help her walk but she shook him off. ‘I can walk on my own just fine.’ She snapped at him, he seemed taken aback by her reaction. Luca didn’t understand why she was so grumpy.

The two walked away from the dangerous dark alley, she extremely mad at herself and he wondering what in the world had happened.